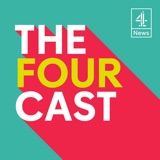 How Ukraine is pushing Russia to the brink

Russian President Vladmir Putin is expected to announce the annexation of four regions of Ukraine - just like he did with Crimea in 2014. But this isn’t total deja vu, because this time, he’s on the backfoot and he's in trouble.    Following months of stalemate after his failure to take the capital Kyiv, Putin’s forces were surprised by a Ukrainian counteroffe… Play episode